Caruso ('99) will forego his remaining NCAA eligibility and turn pro 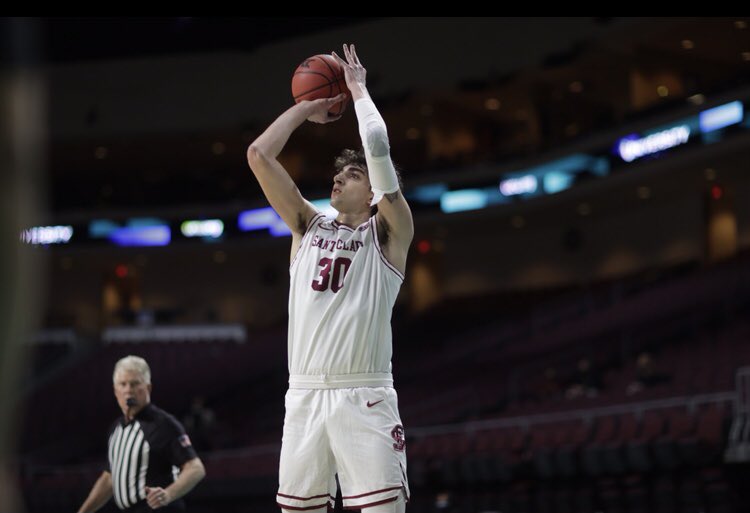 Will definitely miss him. If he can stay healthy, should have a very long and lucrative career in Europe. Disappointing we only got to see flashes of the player he will become because of injuries and Covid. I thought after his Freshman year he was on track to be something very special at Santa Clara but then the injury derailed him. Towards the end of this season he was really starting to figure it out and it was fun to watch. I guess the Braun commitment was foreshadowing of Caruso leaving. Both guys are skilled bigs who can block shots but Caruso does it more with his wingspan whereas it appears Braun is a quicker leaper off the floor.

Best of luck to Caruso but BroncoBob has it right.

Looking at some stats, you have to imagine that Braun can equal or better Caruso’s production even when accounting for more minutes/usage.

Pair Braun with an effective rim protector and some of the defensive concerns might go away.

That’s Jokic’s old team and Petrusev’s current one. 11 players drafted since 2014. If that’s where he signs, hard to argue with that decision.

Best of luck to him – which he definitely did not have at SCU.

Best of luck to Caruso but BroncoBob has it right.

Looking at some stats, you have to imagine that Braun can equal or better Caruso’s production even when accounting for more minutes/usage.

Pair Braun with an effective rim protector and some of the defensive concerns might go away.

Caruso wasn’t a high usage guy, but Braun’s usage rate was much lower. Playing low usage and low minutes makes me think he was an afterthought for SEC defenses – 4th, 5th option. Dunks and a surprise 3 or something. I would dial down the expectations. He played about as much last year at Mitchell did at Wake Forest.

Tough loss but good for him. Didn’t think he’d have that good of an interest after only 3 years but I may be overrating Mega Basket.

Completely different game in Italy. He’s obviously much more suited to Euro basketball. He should do well. Best of luck.

He was pretty well suited to Murica basketball, too.

Just unlucky with getting injured, then having covid come up right on the heels of it and prevent a proper rehabilitation, then being displaced to a hotel out of town from where he lived for most of 2 months.

Tough year plus. If he could have rehabbed the summer of 2020 and been 100% the next season, and gotten to practice and get extra shots as normal, who knows where he would be and where the team would have been by his efforts.

All just unfortunate for everyone, but he probably had it the toughest because of coming off injury and slow recovery due to inaccessible facilities.

I wouldn’t be surprised if he makes a return to the US as a basketball player in a professional league someday, especially if he signs with Mega. Great recruiting find by the staff and his improvement from freshman to soph year was impressive, credit to the coaching staff for training him up. More time in college probably wasn’t going to do him a lot of good at age 21. Right time to start his pro career.

Sad to see but I hope the best for him! I really like Caruso, such a skilled player who represented SCU well. Tough loss for us, but hopefully Parker Braun can fill those shoes. I wonder if Sendek plans on playing him as a stretch five or a stretch four. Now our only true center is Bediako. This will add a ton of minutes for Bediako, which I’m excited for. Even though Braun seems like a project as of now, it seems like he has high potential for us, plus he has multiple years of eligibility. Excited to see what Bediako and Braun can do with a lot of minutes.

Willie could of ruined his career when he came back too early from a stress fracture in his tibia. Don’t blame Willie and honestly the opinions of people on his decision missed the mark on some of his reasons for returning home.
If Josip didn’t need hip surgery, he would of turned pro as well.

Well if he goes to Mega Belgrade, he’s not returning home. He’s going pro with a club that is an nba draft pick factory.

Anyone that criticizes that is being a hypocrite bc they would do the same thing if they had that opportunity.

People go to college to get a good job. Sometimes people get that job before graduating. When it’s a scientist or engineer, no one says anything. It’s only when it’s an athlete that people have an issue.

Who is criticizing him for leaving? I have not seen that anywhere. It seems to be a logical decision as it appears he will be playing at a high level in Europe. If he was going to some 3rd rate league making 30k a year then it would maybe raise some eyebrows, but that is clearly not the case.

Agree w/ Bob. I haven’t seen a critical comment yet.
I think most, if not everyone was excited about Willy’s future with the Broncos, especially after his strong finish to the season and thus are disappointed we won’t see Willy in a Bronco uniform again. But that’s not criticism of his decision to turn Pro.

Agreed – I haven’t seen any criticism of his decision, only analysis.

He may be moving to a “NBA factory”, but I don’t see his game playing well in the NBA. He’s not a bruiser and he’s not a sharpshooter. So where does he fit?

I hope that he proves me wrong, I want him to succeed.

And I do believe that he made the right decision. At the very least, he can have a solid career in Europe. I don’t think that his game would dramatically improve had he stayed at SCU. And he can always come back to school to finish his degree after his pro career is over.

Some talked about it before when it was rumored like it was a mark against the program (if anything, it’s the opposite, especially for European recruiting). That’s what I took as referenced in the previous post by people being off base. That poster can elaborate if they want, or not. But that’s what I was referring to.

Not so much since it has been announced and we find out some high level clubs are interested.

Vrankic I could have seen going to Cibona when Prkacin gets drafted. Hope he recovers well from surgery, has a big year and gets a big contract when he’s done.