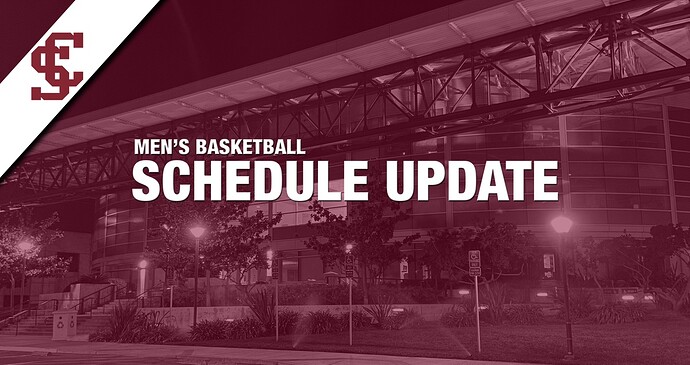 Santa Clara men’s basketball’s game against the University of Portland scheduled for Monday in Portland has been canceled, the West Coast Conference announced on Thursday.

It was kind of ridiculous they had us going from @ Portland to @ LMU and then back up to Gonzaga all in the same week. Also protects us from having to play a team with a terrible NET rating.

also protects us from having to play a team playing a lot better recently.

was this done because of a new COVID scare within the Portland program?

No and their AD is not happy about.

I think this also protects BYU, St. Mary’s, and USF which is why the WCC probably signed off on it. It is definitely in the best interest of those teams for us to be a top 75 Net Rating team. Keeps us as a Quad 2 Home Win for them, and keeps their Road losses to us as Quad 1. I can understand the Portland AD’s frustration but it is best for the NCAA hopes of the top teams.

My other guess is that the WCC Commissioner has no sympathy for Portland after their non-conference schedule. 8 Teams Ranked worse than 250. Can’t let a schedule like that exist in the league.

Hope this doesn’t mess with SCU’s chance a solo 2nd in the WCC???

I believe St. Mary’s is not making up their game against Pacific. BYU still has a game to re-schedule @ Portland and not certain that will happen. Maybe they let USF out of having to go to USD?

Hmmm…not sure how I feel about this. Just hope we don’t fall 1 win short, either in the WCC standings or in making the NIT (or dare I say NCAA). I know a win over Portland doesn’t help (and maybe hurts) NET, and other ratings but 1 less game does hurt the possible total wins tally which could have some bearing on and NIT bid.

I did think it was odd they didn’t reschedule the Portland game for tonight since we both have a bye.

As 'Bob notes, seems this is an effort to boost teams postseason hopes or maybe level the playing field for us, USF, SMC and BYU in league standings battles. It was going to be hard for a few teams to make up all games which would have led to even more unbalanced schedules than we already have…not quite as bad as last season but still not great.

From Portland’s twitter: “We are extremely disappointed, and frustrated, with Santa Clara’s last-minute decision not to make the trip to Portland on Monday,” said Scott Leykam, Portland Vice President for Athletics. “This is a game date and time that has been agreed upon in writing for several weeks. Both Portland and Santa Clara have mutual open dates tonight and Monday and there is no reason the game should not have been played. We would also like to thank Bushnell for agreeing to play us after we learned of the cancellation this morning.”

I’m not sure how it protects USF. Portland beat them once (and almost twice!) already.

Unless you mean that USF indirectly benefits by making sure that SCU doesn’t lose to Portland, and in turn affect USF by reducing the quality of its win over the Broncos.

Also, If BYU did not have to re-schedule their game at Portland, not sure why we had to.

What happened to the good old days when you played every team in your league home /away every season? Should we cancel the remaining LMU and Pepp games (they both suck too).

Yes, but does not happen unless WCC approves. We would be playing if the conference told us it was a forfeit. But yes, when BYU leaves, it will be nice to go back to a balanced schedule.

I get that college sports is a meaner, more cynical business than many of us want to believe, but I’m not a fan. Just feels wrong. We’re just doing blatant schedule engineering to protect the top teams now. If the conference wanted to even out everyone at 14 or 15 games for seeding purposes, this should have been a conference-wide announcement. This makes SCU look bad (even though it was with the conference’s blessing).

If you’re gonna cancel the game, you at least need to switch to giving Portland a home game.

agreed. this looks and smells rotten.

I hope karma doesn’t read its ugly head when we host Portland to close the regular season.

Midwest beat me to it…hope karma doesn’t bite us in the a$$. Imagine the extra motivation this gives Portland for that final game of the reg. season.

We’d be pissed if the roles were reversed.
We can’t or shouldn’t use the ‘too many games in a few days’ or ‘player safety’ excuses as other teams have/are squeezing in remake games just as we have.

Even if this all works out in our favor, still a bad look. I’m sure the AD’s office was involved but this was ultimately Sendek’s decision. Will be interesting if the media asks Sendek about it but I doubt that will happen. If there’s a response from SCU it will likely come through a press release w/ or w/o Herb or Renee’s name attached.

Portland fan here. Read all your notes about the cancelled game. On the whole, a very thoughtful dialogue. I can understand the desire to maximize cash for the conference, but I’m a bit surprised the Commissioner is willing to jeopardize AD and coach relationships to accomplish this. (BTW, I doubt the commissioner has any problems with our setting a schedule against 8 teams lower than 250. New coach with an entirely new team at a school that was under the doormat for the rest of the conference for five years. We’ve moved from around 320 preseason ranking to 210 so far and beat the spread for betting 12 times.) From our perspective, it a decision that lacks both class and conscience, but I wish you well. We went to the tournament the two years in a row it was held in your arena. Love the campus and have always liked your teams.

Welcome Bullwinkle and thank you for your thoughtful contribution. I think many of us would feel quite aggrieved if the shoe were on the other foot.

Does anyone know what the tie-breakers will be now?

St Mary’s, BYU, and Santa Clara will all have 15 conference games. USF will have 16 unless they back out of one down the stretch. I know last year they used Pomeroy to assist.

I think it’s quite possible that the conference announces in the next week to cancel an outstanding game for each member so that it’s an even 15 games across all the teams. I just wish that announcement prompted the Portland cancellation rather than SCU getting out in front of it (assuming that occurs). I think they could still seed according to in-conference win percentage, but my guess is that SCU isn’t the last domino to fall for cancellations here, and the conference will want to reassert itself by making it uniform to the extent possible.

I expect the tie-breakers will be the same…
First, head-to-head, if you split games then I think the 2nd involves comparing records against other WCC teams from the top down…ie- records vs. GU, if still tied/same then compare vs. the 2nd place team and so on.

I think Pomeroy was used last year, not just for tiebreakers, but for actually determining league place & tourney seeding. ie- last season by raw record, St. Mary’s was only 4-6 and 7th place but was bumped up (to 3rd or 4th if I recall) based on Pomeroy since they played the most difficult schedule by a wide margin…they played BYU and GU twice each but zero games vs. the worst teams, Portland and USD. And league play overall ended up much more unbalanced then this season will be…us and USD only played 9 games, SMC 10 while 5 teams played 13 or more games…a huge disparity.
Not arguing that this current cancellation is OK…still think it stinks.