BYU:
Cougars are 14-7 overall, 4-2 in the WCC, coming off a 10pt win over Pepperdine and the near upset of GU last Thursday.
After an uneven early season that included loses to South Dakota and Utah Valley, the Cougars have turned things around and have played better over the past 11 including wins over Creighton and Utah and the aforementioned near upset of GU. In particular, their defense incl defensive rebounding has been darn good for the past month+.
Their recent starting lineup:

Off the bench, guard Rudi Williams was starting early in the season until he was replaced by Hall and averages 11pts/game. 6-11 Noah Waterman has started some as a stretch 4 and can shoot the 3 and 6-10 Atiki Ally Atiki backs up Traore and is an athletic shot blocker and rebounder but limited offensively.
BYU shoots a lot of 3’s but is averaging only 34% on the season; that # is skewed by some huge shooting nights vs. non-DI competition. They have been very erratic from 3…ie- 3/20 vs. Butler and 2/13 vs. LMU but at the other end of the spectrum, 13/25 vs. GU and 13/27 vs. Dayton.

Broncos need to run Spencer Johnson and Jaxson Robinson off the 3pt point line. Traore is a load, currently leads the league in off reb %; Bediako/Holt/Tilly are going to have to work hard to keep him off the glass. Offensively, I think Stewart has a quickness advantage vs. Hall and Braun has a size/length advantage vs. Gideon George (if BYU starts the smaller lineup they’ve used of late)…hopefully we can take advantage of those mismatches.

Prediction: 83-79 Broncos in a shootout.

Big game and big week for the Broncos with SMC looming Saturday. We really need to go 1-1 this week to challenge for 3rd place. 2-0 would be fantastic. While a SMC win would be considered the higher quality win, a win over BYU is more critical as they are our top competitor for 3rd place. I don’t see SMC finishing worse than 2nd whether or not we beat them Saturday.

I want to be cautious, but I have some optimism about this one. Maybe it’s because this, I think, is the first time that SCU has ever been favored to win against BYU (even at home). Am I wrong on that?

The Broncos’ offense is getting better, and their defense is, at least, holding serve. Traore worries me a bit. He was a load under the hoop last year for them, including getting an offensive board and put-back that should have sealed the game for the Cougars if it weren’t for like 3 consecutive BYU mistakes plus one Jalen Williams.

If the Broncos can play with Gonzaga-game toughness, I think SCU gets this one. Give me 79-73 Santa Clara. Braun gets another double-double. Justice gets 25, with 10 of his points coming from the stripe.

Current line is Broncos favored by 1.5

Broncos have a bit more talent than BYU (that’s the first time I’ve ever said that!). SCU 83 BYU 79

Thanks for sharing. BYU wants their “revenge” game - I say Broncos give this pompous program a FOND FAREWELL from the WCC game. Hence, equally motivated for the W.

Anyone know if Podz is going to play ??

Yes. He is playing. He was out for Pacific game o side of precaution.

I have to say that I seen us play in Provo and Spokane. BYU fans much nicer than stuck up Zag fans

LMU just upset GU.
Now even more critical we win at least a game this week.

Finally a quick start for us!

Huge 3 by Podz to end the half . It was like BYU was turning it over so much that we decided we had to join in with our own very curious turnovers.

Need to get back to the defense we saw early.

Made things more challenging in the 2nd half than they needed to be.
Terrible first 90secs of 2nd half, 9-0 BYU run let them back in the game.

But pulled away and closed out well.

Glad that BYU’s last visit to Leavey as a conference foe ended in a loss for them. Don’t let the (WCC) door hit you on the way out, Cougars!

Great win. So nice to send BYU packing to the Big-12 with a loss at Leavey!

Really nice defensive effort tonight; created and forced a lot of turnovers, many of which were converted into points. As was the case at Pacific, everyone played well, but in the last six minutes Podz and especially Stewart were too much for BYU. And while I usually overlook the refs, they seemed to be calling a lot of touch fouls on SCU. The and-one on Bediako was especially bad; that it caused him to foul out made it even worse.

Finally, pleasant surprise to see Jalen Williams in the house, and what looked like a fair number of students. Hopefully Leavey can become a place where road teams dread playing! 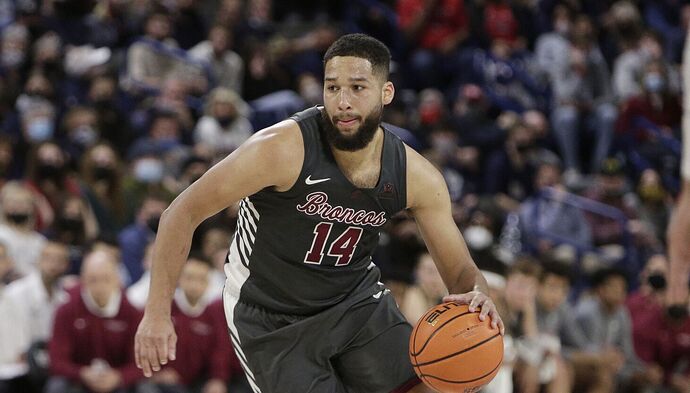 ‘We couldn’t find answers for those guys’: How the offensive firepower of...

The Broncos’ Big Three — forward Keshawn Justice, guard Carlos Stewart and guard Brandin Podziemski — imposed their will, particularly late in the second half.

You beat me to it Bob! Good, very detailed article.

Very good win. I really like how tough and aggressive Santa Clara has been playing of late. That will be very critical tomorrow.

The 15 turnovers aren’t great, especially for a team that had made pretty significant strides on taking care of the ball. BYU has a top-20 defense over the last 5 games per BartTorvik, so it’s not an egregious stat. But in the first half, it felt like Santa Clara should have been up 20 but for some carelessness with the ball. It seemed like SCU (to its credit!) was forcing a lot of BYU turnovers with aggressive play, while at least 3 of SCU’s turnovers were just passes to no one that sailed out of bounds. That won’t get it done versus the Gaels.

Tilly continues to impress. His stat line doesn’t jump off the page, but he is much more coordinated than most 7-footers and is a real defensive asset. He tied with Parker for the highest +/- on the team in the game.

I was very pleased to see a better home crowd. We have been saying for years that games like this are the ones that you need to win in front of the students. They got to see a competitive game against a good opponent with Santa Clara coming out on top. Win enough of those and a good home environment you will make. The Kennel wasn’t built in a day, and I’d expect the Ruff Riders to explode if SCU can just somehow find its way into the Tournament.