As expected, lots of buzz about the potential consequences of a Texas/Oklahoma departure to the SEC. Several articles about BIG12 backfilling with teams like BYU, Houston, Boise and others. IDK how much BYU TV generates from football, and BYU was rebuffed the last time they tried to join the BIG12, but seems like the possible realignment of football into four mega-conferences will push BYU into one of the remaining super-conferences, sort of like what the remaining schools of the once powerful Southwest Conference felt when Arkansas bolted for the SEC. This could happen before the current BIG12 media contract expires in 2025.

Have had a lot of discussion with people I know in college sports about this. Hard to say what comes next. SEC might not be done expanding with UT and OU if it happens.

The cable TV pie is shrinking with all the cord cutters. This feels like consolidation for a model that is doomed, but folks trying to squeeze every dollar out of it before it dies for good.

Not sure if anyone in the top echelon wants BYU enough to deal with the combination of their Sunday restrictions and their only market of dominance being SLC (minority presence in other western markets doesn’t really amount to much in cable sub fees). Could be some mashup of the high end of the MWC and AAC and the Big 12 leftovers in a sort of almost but not quite power conference. BYU could maybe be part of that, if it happened.

Net effect is consolidation of the “big time” in college football so the media outlets aren’t paying for as much filler that doesn’t add to value, and it could be more trimming than it looks right now (like current P5 teams getting dropped).

Lot of moving parts right now. SEC definitely the queen on the board, though.

Immediately thought of BYU when the Texas/Oklahoma news broke a few days ago. Never liked BYU joining the WCC to begin with, won’t miss them if they leave. Could see BYU to Big12, Boise St and Houston make sense as well. Or maybe PAC-12 makes a defensive move to get bigger and brings on BYU.

This does feel like it could trigger the next big wave of realignment.

If BYU leaves, that could pave the way for Gonzaga in short fashion to do the same…
Without BYU and Gonzaga I’m certain Herb could consistently coach SCU to a top 5 WCC finish.

This isn’t the trigger. The contracts expiring at the same time and ESPN and Fox not being interested in buying 10 schools when all they want is 2 and they’re hemorraging subscribers was the trigger.

In a contracting cable tv industry, they’re trying to get the most value and the least chaff.

I don’t know if it will end with UT and OU, but I’m sure there will be efforts to try to get other power programs into the SEC so the networks can buy most of the money-spinning programs in the sports in one contract with less filler (and some of those could go eventually too).

I can’t imagine the Pac-12 wanting to deal with the no Sunday games BS.

IDK if the PAC12 would be interested in BYU, but the Cougars would be very competitive in football, the fans travel well, and the fans who skipped the home games v McNeese would rush to see Pac12 competition. They’ll get a good chance this fall as BYU has five games against the PAC12, including a late November game @USC.

Basketball would not currently present a Sunday problem, since the PAC12 has typically been a Thurs-Sat schedule, with the conference tourney ending on a Saturday. I didn’t look to see if BYU ever played a Sunday NCAA game.

As you clearly pointed out, there are a lot of moving parts, which have yet to be put in motion. Just conjecture now, but I think this will eventually result in four megaconferences, with a couple of P4- leagues, and a move by some of the “chaff” to FCS.

I’ve thought for several years that an implosion of college football is coming. Fewer competitive teams with those teams having lower fan turnout even as more money is getting pumped into the system. Resources and conferences will continue to consolidate, leaving all but a handful of football programs as either costly legacy programs (like the Ivy League, Patriot League) or hopeless money sinks with scant hopes for future success (like the MWC and maybe soon the Pac-12).

This is the time to invest in soccer and rugby which, I sincerely think, will overtake american football in my lifetime in popularity. The soccer investment is mostly there, but I wish SCU would support a rugby program like Saint Mary’s does.

They won’t play an NCAA game on Sunday. We have seen in D3 that the entire tournament schedule has been shifted to accommodate religious restrictions.

But it’s still an issue for conferences. If not for it, BYU would probably already be in a major conference.

The big next shoe to drop is what happens with the Big 10. The Pac-12 is weaker but due to time zones and population distribution in the country, less vulnerable. The ACC grant of rights doesn’t expire until Halley’s comet comes back, or something. Ohio State is the next big prize for a superconference expansion. That’s the move that could really shake things up.

Two things to add here that I have recently been reminded of:

– The California state-funded travel ban to a number of states, including Texas. Who knows what will be the case by the time all of this unwinds, but it’s hard to see the Pac-12 members from California wanting to use internal funds to travel teams to Texas many times a year. Note unrelated to realignment, this probably limits who SCU can schedule.

– The cautionary tale relevant to the WCC and their Gonzaga-related gymnastics. The Big 12 bent over backwards for Texas and Oklahoma. One joke I’ve seen is that the Big 12 got caught out because their commissioner only ever does what Texas and Oklahoma tell him.

You can bet the story will be the same for Gonzaga and BYU. The second they have a better opportunity, they’ll be gone, regardless of what has been done to their benefit. This is why the WCC should treat them as equals to the rest of the league – because if you think you’re buying something down the line by doing what they want, you’re falling victim to the same delusion the Big 12 did.

Laughed out loud. Good one.

You must love listening to broken records.

– The California state-funded travel ban to a number of states, including Texas. Who knows what will be the case by the time all of this unwinds, but it’s hard to see the Pac-12 members from California wanting to use internal funds to travel teams to Texas many times a year. Note unrelated to realignment, this probably limits who SCU can schedule.

Well, I was thinking political climate in general, but turns out SCU hasn’t been to any of those states since 2014 anyway.

The other thing is that a lot of the states on the ban list are also good places to catch COVID. I assume SCU will be 100% vaccinated but still getting ill for no good reason when you can avoid it…doesn’t make a lot of sense.

I wouldn’t be too anxious to travel to any of those states if I was SCU. There are plenty of other options.

Yes…I was away from the board for a week and yet I still return to read what you post.

If one believes “sources” and vague statements by conference commissioners, it looks like the Big 12 is seriously looking to expand and BYU may be on the list. 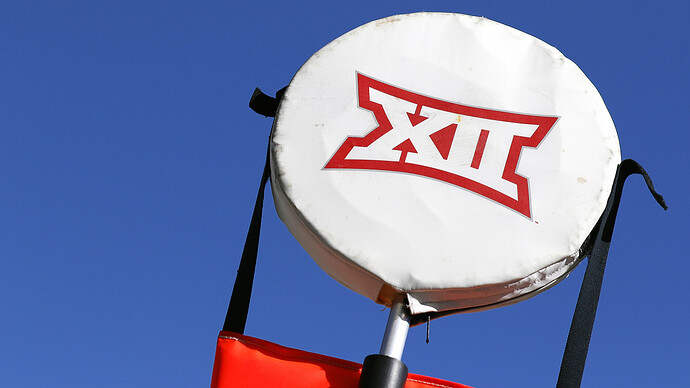 BYU, University of Central Florida, Cincinnati and Houston are the four institutions that are have been in discussion to join the conference.

" BYU, University of Central Florida, Cincinnati and Houston are the four institutions that are have been in serious discussion to join the conference, per The Athletic ."

The Big 12 certainly can’t sit still. The four schools are interesting choices that could be debated ad naseum. But it looks like the Sunday break for the WCC tourney to appease the Y may be coming to an end.

Related, I wonder if the Pac12, Big10, ACC alliance could make it even more difficult for WCC teams to schedule P12 opponents OOC, given the alliance members will be beholden to schedule OOC games with each other.

Only thing that gives me pause about the veracity of that list is that Memphis isn’t on it.

It might be that gonzaga ends up playing more sec and less other major conference. But they’re an exception to most every mid major norm.

Weave- I’m not worried much about the Pac12/ACC/Big 10 alliance’s impact on our non-con scheduling. I suspect the alliance will have an agreement or commitment to play something like 3 to 6 non-con games against each other. Will still be a need to schedule 10-12 other non-con games and and since some of those alliance games will require cross-country travel Pac-12’s will be motivated to schedule more of the remaining games against west coast teams. Even if we lose, say 1 Pac12 game there are still plenty of other good scheduling options from the MWC for instance.

FYI, it sounds like this is a done deal.

Memphis was strongly considered but Houston won out as the last choice. To me, Memphis should have been chosen over Cincinnati, but apparently there was a commitment to adding a school near to West Virginia in recognition of its travel hardship.

Next question is what the American conference, now clearly headed by a basketball power, does in response. Or perhaps what individual members of the AAC do.

Now hearing rumors Gonzaga will be leaving too. Just not to Big12 obviously

I can definitely see it. Like I said, all the bending over backwards will count for nothing.

I haven’t gotten any definite word on anything happening and it’s very possible I won’t. I had pretty good knowledge about Memphis which was why it didn’t make sense to me that they weren’t in the athletic story. But I guess the A just waited until it was decided and then reported it as if it wasn’t.

Lot of things could happen next.

Would be interested in details on what you’re hearing and from where.