Line: No line yet

WSU:
Kyle Smith’s Cougs are 19-14 overall, 11-9 - 5th place in the Pac-12. NET rank of 61.
Has been an uneven season, no terrible losses, a couple of wins over fellow NIT Pac-12 teams Colorado and Oregon, two narrow two point losses to Top 25 USC.
Athletic, 6-11 freshman post Mouhamed Gueye has missed the past few games, not sure his status for our game. In his absence, Smith has shuffled the starting lineup, last few games has been:

The Cougs play a slower pace and are a fairly balanced team, good on both Off and Def; on Torvik ranked 25th on D, 73rd on O.

The Cougs athletic and long frontcourt and athletic wings could be a challenge for our frontcourt, Abogidi, Jackson and Rodman are all very good offensive rebounders. They play a 3 guard lineup so Keyshawn is likely going to have to guard the fairly athletic Noah Williams or TJ Bamba when he comes off the bench. Their two starting guards are small so we do have an advantage there, Jalen in particular should have a significant size advantage most of the time.

While the Broncos are on the road, I wouldn’t expect a large or raucous crowd; maybe 3,000 to 4,000. Pullman is a small town and Spokane folks are obviously more interested in Gonzaga. And the 8pm weekday start time will discourage Spokane alumni from traveling the 1hr15mins to Pullman.

Prediction: Broncos prevail 77-72 to advance and most likely play SMU.

They basically seem like a worse version of St. Marys.

Their last 10 games have also been, if not a tail spin, a little stagnant at 5-5. Torvik has them as the 98th best team in the country over that time frame and SCU as 58th.

Stylistically, yes, maybe similar to SMC.
Difference is most of WSU’s guys are far more athletic than their SMC counterparts. And WSU has far better rim protection, a block rate twice SMC’s. WSU ranked 42nd in blocks on Torvik, SMC 291st…mostly because of WSU’s long/athletic frontcourt.
For SMC, Logan Johnson is explosive and their best athlete but beyond him the rest of their rotation are just OK athletes, with decent to size for their position, strong/scrappy guys who play really hard and who play good team D and execute their game plan.
For WSU, Jakimovski is just an OK athlete but all the other guys are quick and athletic for their position. And Abogidi has NBA level physical makeup.

Underestimate the WSU Cougars at one’s own peril…this team has competitively played some of the best NCAA teams this year, ending in some very narrow losses. We’d better have our A-game ready.

Yup. The thing that stands out to me about Wazzu is their athleticism up front. They have some good wins this year, this is a tough matchup.

Hoping we can show some different looks! “Zone after a miss, man after a make”, make them feel us - pressure the ball on their side so they burn time getting into the offense…etc

I’m sure they are considering a box & 1 for JW!

Good to see us in the postseason, happy for the guys.

Would be great for the program to make a little noise this tourney. This game looks winnable. Wazzou is decent, but while yes they played usc tough twice, they also nearly lost to 3 win Oregon State twice. They are solid defensively, but have often gone on long scoring droughts this season. Really not a great offensive team at all, pretty weak shooting %'s. Ultimately, it’s a pretty mediocre team. JW and Vrankic likely the 2 most dynamic players on the court I think. Not an easy game, but it’s one the Broncs should have a great chance to win.

Washington is favored by 3.5… Vegas would have the game as pickem on a neutral court. One silver lining is that while WSU is very good defensively, they are not elite at defending the 3. For example, WSU is 106th in 3PT FG Defense while the USF team that gave us so many problems the second time is 9th in the nation at defending the 3. I am sure they will try and run us off the line and direct us to their shot blockers but I don’t think they have guards with Bouyea or Shabazz elite quickness.

Flowers and Roberts are plenty quick, maybe not Shabazz quick but comparable to Pipes.
Bigger problem for them is that at 6-1 and 5-11, they are short in the backcourt, one of them will have to guard Jalen; easy for Jalen to get his shot off either midrange or from 3. As a result I expect to see plenty of minutes for WSU’s taller wings off the bench (6-6 Rodman or 6-5 Bamba) plus 6-5 starting wing Noah Williams…expect to see 2 out 3 of those guys on the floor together a lot so they can match up better with Jalen and Justice meaning less time for Roberts. Flowers leads them in minutes played, scoring, assists and is their top 3pt threat so he will be out there for ~35mins. 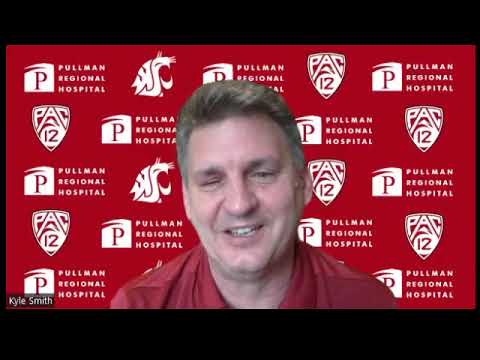 Kyle Smith press conference from yesterday. Says he remembers recruiting Vrankic all the way back when he was head coach at Columbia.

Some good nuggets from Smith’s interview…

Agree with 92’s posts about both the athleticism and differences from SMC. Wazzu’s defense is strong, but it is based far more on athleticism. The main player I’m concerned about is Abogidi. He was easily the best player on the court in the opening round of the Pac 12 tourney and looked healthy. Noah Williams is hopefully a non-factor, but I watched him score 40 against Stanford last year and hit insane shots. He’s had a terrible year but has shown himself to be a prolific scorer in the past. Tough to know who will show up in a big game.

In before tip-off. Give me a thrilled Broncos squad in the postseason over an athletic but less-driven Pac-12 team, coached by a WCC traitor no less.

Giordan or Jalen? Jalen is on the floor now. My feed came in off ESPNU at the 14 min mark, so I didn’t see an injury.

That Braun dunk on the inbounds was purty cool.

Hope Giordan is alright. I’m watching for him on the sidelines now.

I would say the under is safe.