Really bad look for Few and GU. Opposing fans will be relentless this season.

So far most of the posts on the GU board are pissed and not letting him of the hook: Coach Few Cited For Drunk Driving (spokesmanreview.com)

Will interesting to see how this plays out.

It’s a completely irresponsible and flagrantly dangerous thing to do. He could do any number of things to avoid this, but instead he is swerving and speeding in the daylight hours in a residential area with reduced reaction time. Imagine if a kid had gone into the road. Would have never had a chance.

Then he refused field tests bc he knew he was drunk. It wasn’t a matter of thinking he was ok. He knew.

And of course he’s saying it was an isolated bad decision never to be repeated. Hopefully the media asks him if he has ever done it before bc if he says he hasn’t, I guarantee you he is lying. People don’t drive while knowingly drunk for the first time at 58.

He should at a minimum be suspended for the season and have mandatory rehab and education requirements. Do I expect it? No. He’ll be back way before conference season starts.

I told you all this guy and this program aren’t what they portray themselves to be.

I’d bet the school suspends him for a bit. Perhaps we don’t see Few on the floor until the WCC begins.

I can guarantee you he won’t be dismissed.

I’ll set the over under at 3 games. Which is beyond insufficient. But it’s Gonzaga. They sold their souls a long time ago.

Additional detail, he was stopped on a street with bike lanes with a roundabout. So if he was swerving, he was swerving into a bike lane (correction: I think it’s a bike route without lanes, which is so much worse, literally my everyday fear as a lifestyle cyclist is getting smashed by someone weaving around the road) and/or in a roundabout cyclists are expected to use. Just one more way he could have killed someone.

I would not want someone who would do that to be in a position of leading young people.

Rarely do I agree with 'Noob, but your characterization of the incident and the light consequences are spot on. He’ll get a 2-3 game suspension at most (Texas @ home, and maybe both LV games: Central Mich and UCLA so he doesn’t travel with the team). He won’t sit out game 4 against Duke. Unfortunately, there are no pre-season body bag games to use.

The only precedent I can recall is when SCU last beat the Zags at home-- Danny Pariseau lit them up (I was there). Zags star was caught the nite before with a dosage and bag of magic mushrooms. I believe it was only a one game suspension.

I’d take the over.

Since nobody was injured this incident is just going to fade from everyone’s mind eventually (not that it’s right, just the way of the world). For the time being Gonzaga will have to suspend him for a decent spell otherwise they appear to condone his actions.

The school will want to take the moral high ground (while still competing for an NCAA crown) so I’d say he’s likely sidelined for the majority if not entirety of non conference play.

After this though Few is one more mistake away from ruining his career.

Possession shouldn’t be anything. Only heroin and non prescription opioids should be illegal to possess and use.

It’s when you pilot a 1500+ pound death machine after taking them that I have a very big issue.

Bob Huggins all but got fired for a dui. He was suspended the next day and that lasted a little over a month. No basketball activity, not allowed in the building or to contact staff or players. Then the new university president fired him that summer (he resigned under pressure, whatever) after not rolling over his contract the previous summer when it happened. But he was a dead man walking and the only reason he wasn’t fired sooner was probably bc they couldn’t afford to.

That was 2004. If anything it should be more severe now with the additional options for transit.

Apparently for some reason Fews contract expires in 2022. So give him a long suspension and then don’t renew his contract and they get away from it with no buyout.

Driving drunk is bad, and I agree that it’s likely not his first time. Having recently had a family member suffer tremendously due to a drunk driver, I can empathize with the impulse to throw the book at someone like Few. He had plenty of money to hire a cab, and the only thing separating him from a manslaughter charge is the fact that, seemingly, no one was on the road at the time.

But I’m also a believer in restorative justice, even though Mark Few, admittedly, is not the usual object of a restorative justice conversation. The consequence should be severe enough to ensure that Few never makes that decision again, but I don’t really feel that anyone is served by firing Few or maybe even suspending him for a full season. BB’s prediction of a suspension for OOC seems right. I think he should also discuss the issue candidly with Gonzaga students, some of whom have probably made the same mistake. And the “leash” on Few by his employer should be a whole lot tighter now.

But, as much as Few can irritate me, he does seem to care deeply about his players, and Gonzaga basketball has been important for Spokane in an era where Spokane needed a win. Few doesn’t deserve special treatment for being a successful basketball coach, but I also don’t think the consequences should be punitive beyond the point of any utility for the community, given the good he is capable of doing in his current role.

Not to get down the rabbit hole… but we last beat Gonzaga at home in 2011 - fueled by Kevin foster’s 36 points.

Next season Foster got a dui (after a loss against St Mary’s) and missed the remainder of the conference season - I think it was like 12 games.

It’s easy to care about people you have committed to. Driving drunk shows not so much consideration for people you don’t know.

Refusing the field test suggests he had a plan for this day. Probably has thought two ways: if I get pulled over they probably will let me off, and they don’t, I don’t want to do a Huggins and look like an ass on camera.

And I feel like a college head coach, indeed the single best known and almost certainly highest paid university employee, should be dealt with more sternly, by far, than a student.

From the gu boards it sounds like this is even worse than it seemed. Apparently he was called in by concerned citizens for his driving. So it’s not like he got “broken taillight” pulled over at all. Either .12 was after giving him every chance to sober up, or he drives recklessly while being one drink over the limit, which means he does it when he isn’t over the limit.

Throw the book at him.

Some reporters should start digging into his past as well…if he’s ever been stopped on suspicion, stopped in other jurisdictions, etc. Full inquiry. So many red flags here.

He was uncooperative, with as incoherent as he was, he had his excuse for not taking the field test ready, and he was called in based on how dangerously he was driving, not bc some cop didn’t have anything better to do.

I dare say if he was one of his black players, and they twice refused to get out of the car and couldn’t keep their hands out of their pockets, would have gone much, much differently.

And of course he played the “I’m the gonzaga coach” card. Finally, he was given preferential treatment based on that status when he was ordered to be released.

Has he even been suspended yet?

Their forums have become disgusting with apologists and even people making few out to be a sympathetic figure.

They are exactly what I thought they were. If they were being standup about it they would have already suspended him. 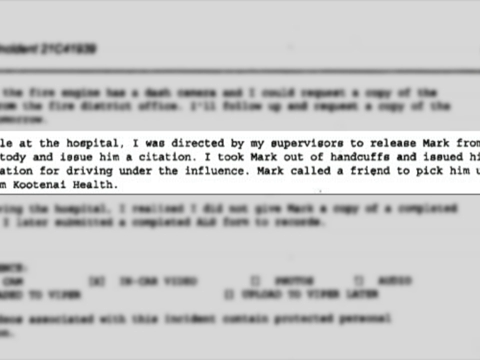 The facts are quite bad. A suspension for all of OOC should be the starting point.

I think suspension from all activities is more appropriate. Suspension from games is just a show for the public and says nothing about fitness to lead the team and program.

They have a recruit coming on campus soon and there’s no way i would want him meeting with that recruit or any for a while.

Still nothing? Looks like gonzaga went to the maga school of responsibility: don’t take any.

They’re probably just slow playing it. If they wait a bit they before making an announcement they likely keep it from being such a hot topic. Let the air die down a bit.

Perhaps they try and sweep this under the rug, but I’d expect a decent suspension is looming.

Would they have waited a week or more if it was a player?

They are who I said they were.

If it happened in the offseason like this, then yes.

It’s not right. He is still the face of the athletic department and the whole school despite having admitted in his statement to having failed to live up to the standards of leadership (completely separate from the legal process).

He will still represent the school in recruiting and every other way without having faced any accountability for that.

Any HR leader will tell you that is the last thing you want if you have an issue with an employee. You want them out of the company’s purview asap until the company can decide what action should be taken.

Probably most non tenure employees would be fired. But gonzaga has already sacrificed its soul on the altar to basketball.

They are what I said they were. And the media will let them off the hook.

For the record, Huggins was suspended indefinitely about 2 days after informing the athletic director of what happened, which I believe itself was a couple of days after the arrest.

One other thing: when sendek had a player arrested for dwi in NC in early October, he suspended the player from all basketball activity for a month and competition through the end of the semester. He didn’t cop out around the legal system or it being the off-season.