The preseason pieces are starting to trickle in.

Here’s one from Busting Brackets that ranks the top 10 incoming transfers in the conference. Two of the incoming SCU transfers are mentioned (you can probably guess which ones) and Santa Clara is mentioned favorably as a school that recruited the transfer portal very well.

Here’s a brand new podcast by Zack Farmer, who has covered the WCC for about a decade both in the media and from schools’ internal media offices. It’s a bit rough, as you might expect from the first episode but includes a good summary of the Few DUI, BYU’s exit, and weighing additional members.

And here is a series of pieces by longtime WCC obsessive and Spokane-based reporter, Will Maupin, about the BYU move to the Big 12.

Decent article, thanks for posting Patty.

The author predicts Djuricic coming off the bench as a 6th man but I think I’d give a slight nod of Djuricic over Bediako to start alongside Vrankic. Two completely different players with different pros/cons so it’s less about about Djuricic and Bediako competing direclty against each other and more about what style of play you prefer, what you want to emphasize, matchups, etc.

Re: USF…the author included Tape and Stefanini but no mention of Massalski from USD. Massalski isn’t going to wow anyone and doesn’t score much but he provides precisely what USF sorely lacked last season…some interior muscle, toughness; he’s a decent athlete and will provide improved rebounding, shot blocking and post D to along with plenty of experience and familiarity with the WCC…I suspect he will start, maybe alongside Tape.

Agreed on Massalski. I’d bet at USF he’s averages a double double. He must not have got along with Scholl… no reason he wasn’t playing all the time at USD otherwise.

I realized that there were a couple of other bits of pre-season WCC media coverage that I had seen in the past few days. Rather than give each one its own thread or confusingly post them here with the title being about the Busting Brackets listicle, I changed the thread title and added them to the initial post. I’ll add others to this thread as I come across them.

I like that more folks have taken an interest in covering the WCC as a conference. A lot of it is disproportionately about Gonzaga and varies in quality, but the increase in interest is nice to see.

They pick SCU as sixth. The analysis is brief on the podcast but will likely be more extensive in the eventual writeup. You have to skip to about minute 42 or so for the beginning of the WCC analysis.

And here’s another piece from Will Maupin, this time ranking the various WCC schedules. The grades are a bit harsh but the relative rankings seem about right.

They’re clowns but now after the last month, its probably fair assessment on paper. Games aren’t played on paper and they probably don’t know much about scu’s freshmen, and they’re probably over-relying on misleading stats from a stunted year last year. But taking all of that as given, it’s probably reasonable.

Need j Williams to develop into a true star, a mid major Julius hodge or Carrick Felix (expecting anyone to be James harden is a bit much) who impacts in every game in multiple ways. And need pipes to be able to play with the ball (he should be good without it in catch and shoot). And team rebounding, 5 to the defensive board with a sense of urgency.

A little off-topic, but here is a piece from the folks at mid-major madness. They go through some “under the radar” mid-majors that could surprise this year. SCU is not on the list, but three OOC opponents are.

I’ve fallen a bit behind on posting WCC previews and predictions.

Here’s Will Maupin’s Santa Clara preview. He gives SCU its own tier at #6–ahead of the bottom dwellers but behind the rest. I think that last year’s team closed on a pretty high note, likely coinciding with a little more stability of being able to play and practice at home. I’m looking for that to carry over with full, unrestricted use of the practice facility. I’ll be disappointed if SCU finished 6th this season, but I understand how an objective observer would conclude that.

Matt Norlander at CBS ranks every college basketball team at the beginning of the season. I won’t give away SCU’s spot, but you can find it here. I think it’s a little low also, but I wear red-and-white glasses this time every year.

The podcast by Zack Farmer (link toward the top of the thread) did its SCU preview on the latest episode. My guy Zack needs a co-host, but I’m happy to benefit from his passion project. As with pretty much every other source, Zack has SCU at 6th. No one yet has put Pacific, Pepperdine, Portland, or San Diego above SCU that I’ve seen. And no one is willing to throw SCU above USF, LMU, or SMC in the 3-5 slots.

I’ll link more as I find them.

Most of the other teams got a bailout by getting back a player that they really would have been a lot worse without (Bouyea, Scott, Barcello). SMC gets ranked higher on reputation even though we know they weren’t anything special last year. It seems like a lot of the commentators recognize that SCU was handicapped by the situation last year, but don’t bother to think about what that means when it comes to evaluating them. Like you’d look at stats and think Justice is a bad shooter when he isn’t.

In a normal era where the seniors can’t come back, you’d be looking at J Williams and Justice as two of the better returners in the non-Gonzaga division of the league and freshman classes league-wide having more of an opportunity to have an impact.

This year is just going to be weird, probably in all of CBK, because of all of the super seniors. I don’t like it but I don’t know what the better alternative would be. But it’s not like there’s no downside to it – the downside is that incoming freshmen are going to be marginalized and probably more of them will transfer.

Is this Will Maupin guy anybody? The site has basically no information on him other than he has a blog, which literally anyone that wants to have a blog could. His comments about the schedule are sus. SCU has a good schedule this year. Norlander is clearly just rewriting Kenpom rankings without further context in most cases. He mentions offensive efficiency but says nothing about the context of it (not being able to practice properly or play home games or live at home).

Both of them are probably being a little harsh considering what they know, but considering what we know about people they think are going to be on the team that aren’t, it ends up balancing out just by happenstance (not that it was due to any insight on their part).

Maupin does freelance work for a Spokane paper, I believe. He does a variety of stories, but is now the Gonzaga basketball correspondent.

It’s a job he got, in no small part, for spending a decade writing about the WCC via his own blog, Mid-Major Madness, and other sites. Much like Zack Farmer, he’s kind of a WCC obsessive. I don’t agree with all of his takes–and I think you’re right that he grades SCU’s schedule too harshly–but he’s one of maybe only 3-5 commentators who knows the WCC inside and out, so I appreciate his insight. He actually watches non-Gonzaga games and has opinions, right or wrong, on the 7th guy on the USD roster, which is hard to find outside the power conferences.

Yeah all right, I guess that’s fair. I don’t have any opinion or even know yet who is the 7th man on the SCU roster.

I suppose it’s hard to pay that much attention, write apparently coherently, and not know something about it.

I’ve heard those sentiments over and over for Herb’s first 5 years, “no reason we can’t compete for third place.” Somehow though, Sendek just can’t get it done.

Probably because it was never a realistic objective expectation.

Fans are not objective, will wonders never cease. But I am. I’ve made a career on it.

SCU as a program has rarely “gotten it done” to the tune of finishing top 3 in even the previously weaker WCC in the last two decades.

With NIL, the future of recruiting is even more going to be about the school and the town and the “support” (read: $) therein. So if you want to prime the pump, get some Silicon Valley business bros to create a kitty of NIL money for players. Though it seems like companies are starting to leave Silicon Valley for greener (read: cheaper) pastures. And pastures that look more like a pasture.

Renee made it clear when she hired Herb and gave him by far the richest contract In SCU history that expectations were to consistently compete for NCAA and NIT bids. I was there when she said it and I supported her decision.

I don’t see anything about that here and I don’t remember ever seeing it anywhere else. It wasn’t in her opening statement to the media either at the press conference. 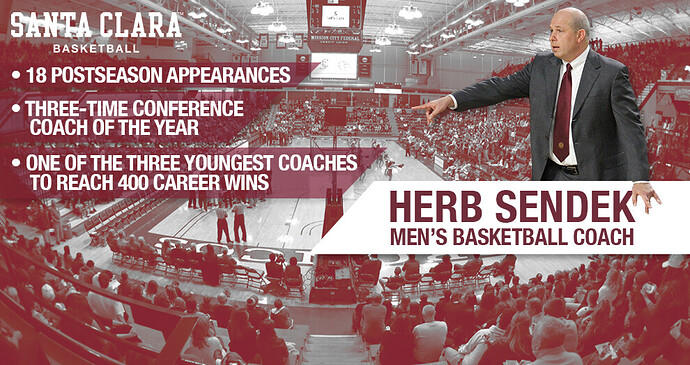 The former NC State and Arizona State head coach takes over the reins of the Santa Clara program.

Can you cite this supposed statement?

I do see Carroll Williams’ very supportive words which say nothing about any of that, though, but talk about teaching and the academic priorities of the university, something that Dr. Baumgartner talked about as well in her brief opening statement.

I don’t know who you are so Im not sure you were present when she said it to me. I hope this satisfies you as i have no reason to lie and not sure why i or others need to prove anything to you?
Why is this a bad? Of course she wants the program to reach such levels.

I just feel like if someone like an athletic director had such an expectation, there would be a public record of it.