College and pro football are about to begin but the Euro tour and games have me looking ahead to the Bronco hoops season.

With 3 of our top 4 scorers (Jalen, Vrankic and Pipes) moving on, there are a lot of question marks for the upcoming season. But the incoming transfers, frosh, and potential growth of young returners from the 2021 recruiting class (Stewart, Holt, Tongue and Knapper) make what looks to be a deep and talented roster. There will be lots of competition for PT and there will be winners and losers in this regard.

As I said, lots of question marks:

Potential Starting Lineups:
Lots of options here, but I have a feeling Sendek goes with a ‘small’ lineup with Justice at the 4 in order to get both Marshall and Podziemski on the floor at the same time at the 2 & 3. Here’s a few options:

With what appears to be lots of depth and a good balance of skill, athleticism and size represented on the roster, there is a long list of rotation and lineup options.

One thing I like in this roster is that many of the guys who are likely to come off the bench (Knapper, Giordan, Akametu, Tongue) are very athletic and in the case of Akametu and Tongue also very strong. There may be a slight drop-off in skill/execution but not in athleticism…those guys should be able to bring good energy, and defend and rebound as well as and maybe in some cases better than the starters.

Thanks 92bronc for the detailed analysis! One thing I really like about this is that Justice will finally get optimal time at the 4 now that Vrankic graduated. The times Justice played the PF last year he did a good job in the paint and pushing guys down low. Like you said, this year we have a ton of talent and a lot of depth. Should be an interesting season.

FYI Torvik has now updated all of the teams for the upcoming season. SCU checks in at 111, good for 5th in the WCC after the Zags, SMC, BYU, and USF in that order. Portland follows closely behind at 114.

So scrutinize the metrics as you see fit. Excited for the beginning of the season, though!

I’m cautiously optimistic on this upcoming season, mostly because we have the most size (both height and weight) on this roster in very long time. We have four guards at 6’5" or taller. Braun is 6’10" at forward spot. Podz looks like he can score, perhaps filling in a big void left by JW. I’m truly hoping that Tilly has some skills on the offensive side to complement Bediako’s defensive presence. When is the last time we’ve had a true 7-footer? Ron Reis? Or was big John 7’? I seem to remember he was 6’10" or 6’11".

When was the last time we had one who was a real threat… a while.

According to the article below, our starting lineup for Monday will be Carlos Stewart, Podz, Justice, Parker Braun, and JB. 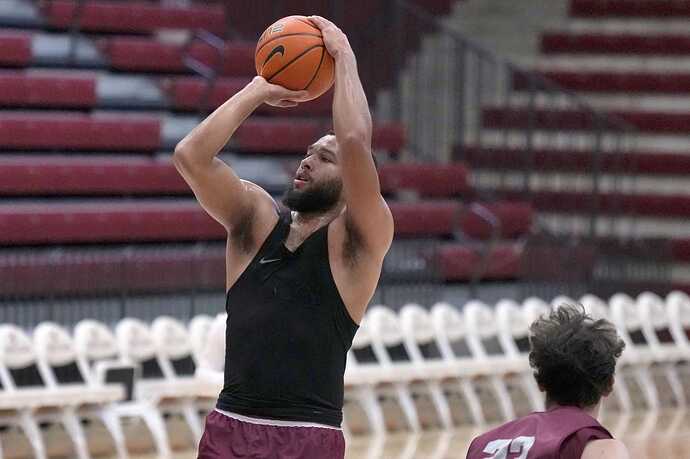 Forward Keshawn Justice, one of Santa Clara’s two returning starters, could end his...

Interesting. Sendek going with the ‘big’ lineup, at least to start. Rebounding and interior D shouldn’t be a problem with that frontcourt.
A few things to keep in mind:

Looking forward to the start of the season…I’ll try to get a game 1 thread up soon.