Thought I would start a thread …

I’m predicting and hoping all 3 advance this week.

We will know how good the wcc’s tourney is very quickly with all three games on Thursday.

Hope Wertz plays well, too bad he’s been coming off the bench this year…ave 4.4 pts/game, didn’t do much last night. They have a really good Frosh who I think may play in front of him. They play 'Bama on Friday after flying overnight from Dayton to San Diego! 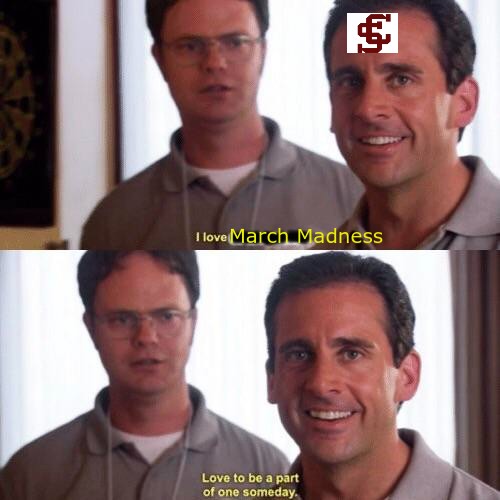 I feel your pain, rednwhite. 1995 (Boise) and 1996 (Tempe) were magical. Getting that taste, so many years ago, has made the drought since all that more painful.

Getting blown out in Pullman on a Tuesday night in the NIT didn’t scratch the itch?? lol.

The NIT bid was a big tease…better than the buy-in tourneys, but to me, the NIT is really only valuable as an intermediate step for young teams toward a Big Dance bid (Memphis is the latest in a long line of examples).

For our team, the NIT bid feels like a final ceiling, not a new floor. I hope I’m wrong, but history has not been kind. I’m hoping our new SCU president is the impetus for change.

Definitely a huge distinction between non-NCAA post season bids as a victory lap for seniors v. a building block for the future.

But no doubt it’s better than an ignominious .500 season for the program going forward.

By my count, Herb is 46-46 in the WCC after six seasons… but in the last three years, we are 53-33 overall, the best total stretch for Bronco hoops since… the late 90s? I think Herb is slowly putting more pieces into the foundation here. Un-flashy, but solid. But how we do next year will tell much.

Buckets and 'nashty-
Agree. The primary benefits of an improved hoops program is to spur student, alumni and maybe a few local fans interest plus the added notoriety/image benefit to the school as a whole. And recruiting gets easier as well. Making the NIT but then bowing out 48 hours later and not looking good at all doesn’t do a heck of a lot for you.
We needed to win a couple in the NIT or even better advance to Madison Square Garden, then a few people, media and recruits may have noticed.

In terms of the future…I mentioned this in another thread…for the solid 2021/22 season to really provide much longer term benefit for school and program you have to build upon it, meaning you can’t take a step backwards next year to say an 17 or 18 win season or even worse .500, that just kills the little momentum and puts you back in perpetual ‘wait til next year’ mode.
So it’s critical that Sendek brings in some immediate impact transfers since we’re losing 2 and maybe as many as all 4 of our top 4 players.

Looks like Timme is a 4 year Gonzaga player. Would rather not face him because he is a very good college player but without a 3pt shot he just brings nothing to the next level.

Georgia State is giving them a game thus far. A loss would be apocalyptical for them and the league’s reputation.

Zags pulling away now…was just a matter of time.

And USF…I haven’t watched them but apparently Murray St. has a good pair of guards comparable Bouyeau/Shabazz…we’ll see if that neutralizes USF’s strength.

SMC looks good (the Gaels’ meatgrinder offense is working) and, probably more importantly, Indiana looks exhausted. Interesting how SMC can be referred to as “rested” while SCU, with 3 days less time off between games, was described by many as “rusty”.

Would be pretty cool if WCC could go 3-0 in these opening round games. Unfortunately for USF, I think they got a really rough draw. I think Murray St. plays Don-style ball better than the Dons.

Even without Massalski, USF looks every bit as good as Murray State but it has been brick city from 3.

clutch THREE by Bouyea to tie it up with 9 seconds left!

EDITED: and we go to OT

I think these two teams should just agree now to schedule a game for pre-conference play this fall. Winner of tonight’s game hosts.

Did not love the shot selection from Shabazz with like a minute left when Bouyea was literally scoring every trip down the floor. Great game. USF would be favored if they played again with Massalski.