USD and Pepp playing now, USD up a few pts early on.

On women’s side, the #7 seed Broncos advanced to the 2nd round with an easy, 93-69 victory over Pacific. WCC 1st teamer Lindsey VanAllen led the way with 31pts; All-WCC 2nd teamer Merle Wiehl had 20pts, 10 rebounds. They play the 6th seed Toreros tomorrow at 2pm.

USD takes care of Pepp 74-67. Portland next up for USD. Hoping USD derails Portland, I’d rather we play the Torreros.

USD would also be playing their 3rd game in three nights vs SCU, if they get by Portland…definite advantage versus what should be some very tired legs, fatigue in general.

Fully agree with the sentiments here, but let’s be realistic. Portland split the season series with the Toreros, losing the first match in OT, and then pasted USD in the second game (just a couple of weeks ago) 92-60.

USD is gonna need to bring their “A” game vs. this hot Portland squad. Yes, we beat the Pilots by 13 in the final regular season game, but that game was close most of the way. And our defense was not good.

Wow I love that Portland line!

Was looking at the box score from the blowout game and looks like Terrell Brown did not play that game. He is quite good for USD when motivated. Elite shot blocker and played very well against SCU the first game. I am just hoping for Triple Overtime.

looks like Terrell Brown did not play that game.

Understood, but not sure that TB’s offense + defense makes up for 32 point differential. Plus, we have to account for USD playing consecutive nights. I think the betting line is extremely mispriced. 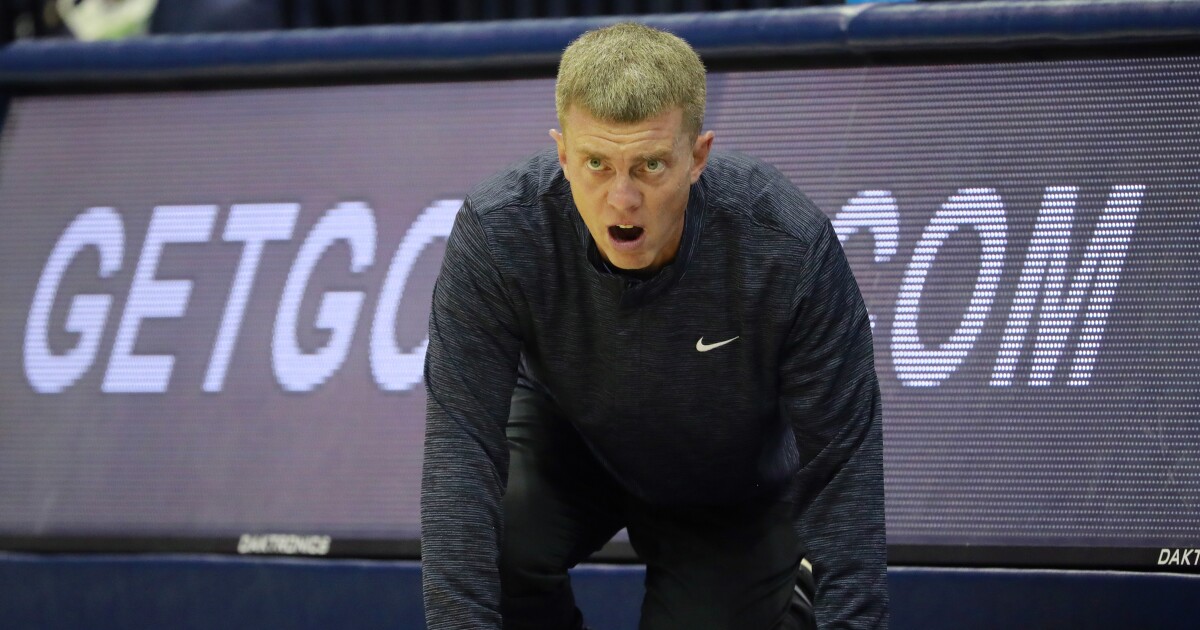 Coach Scholl keeping focus on Toreros' present, not his future

He's under contract for another year, but it's possible he won't be back

It is behind a paywall but the USD AD is giving a “no comment” on Scholl’s future.

Wishing Scholl the best, seemed like a solid well liked dude during his time at SCU. USD showed improvement this year, roughly .500, much better than the single digits wins the previous 2 years. Not sure if that’s enough to save his job.
He did have success in 18/19, making a nice run in the WCC tourney and getting a NIT bid but that was with a talented, senior laden team that carried over from Lamont Smith.

Agree on the Portland-USD line, seems like it should be something like Pilots -6 or more.
As much as I’d prefer we play USD, I’m expecting a Portland win. As Buckets noted, our 13pt win over Portland last week is a bit misleading…just a 1 pt margin at halftime.

I have some match-up concerns vs. the Pilots…Roberston was having his way with whoever guarded him in the 1st half, our bigs struggled at times to guard Portland’s good 3pt shooting forwards on the perimeter, etc.

Watching lmu-byu and the basketball looks strange… almost like those hard rubber outdoor balls, also very light. Something seems off and can’t put my finger on it.

Watching lmu-byu and the basketball looks strange… almost like those hard rubber outdoor balls, also very light. Something seems off and can’t put my finger on it

Complete domination by BYU. They look really good. Would not shock me to see them as a slight favorite against USF. Things are starting to click for their young bigs.

I see the same thing. Guessing brand new ball with the WCC logo on it.

The question is who has the best chance to beat Gonzaga? I’m pulling for Usf.

Nduka for Portland has made 3 three pointers all season yet USD feels the need to have their elite shot blocker guard him out at the 3pt line. Just bizarre strategy.

Interesting watching USD play defense against Portland’s Robertson on the block. They are way overplaying Robertson’s left shoulder…making it so the only way he can finish with the right hand is to fade away substantially.

The Pilots it will be.