Former starting point guard Mike Meadows has missed 4 of the past 5 or 6 games with a bad back but did play vs. Pacific off the bench.

Going to be honest… this game scares me. Not the pilots, but I can’t imagine us finishing 3rd.

Gotta just go out and crush 'em. They’ll be playing with a lot of (valid) anger and resentment. Hit them hard so it sours and turns against them.

SCU clobbers its way to third: 85-65 Broncos. Justice leads all scorers with 24.

Fate and history are stacked against us.

These damn mid-afternoon tip-offs…I do not feel good about this game.

It’ll be a squeaker:

It’s parent weekend, probably the main reason for the 2pm start. Hopefully a few more people in attendance than the past early start games. In January, the school did cancel the in-person parent weekend stuff for online offerings but it appears a lot of parents have maintained their plans and are here in person visiting their kids. Will be my 1st home game of the season…can’t wait.

Some other scouting report type stuff…

I’ve watched portions of a few Portland games. Defensively, I’ve seen them do a lot of double teaming and trapping of ball screens and when the ball goes in to the low post. I suspect they will do the same vs. us, especially when Jalen has the ball in ball screen situations and maybe on Vrankic in the low post. LMU successfully doubled Jalen on ball screens and forced the ball out if his hands resulting in 0 pts for him through the first 30 minutes of the LMU game…I suspect Portland noticed.

Portland’s most frequent lineup is with the 6-8, 210lb Moses Wood and 6-6, 220 lb Tyler Robertson as their biggest guys…not a lot of size there and very limited rim protection. Maybe a game with more opportunity for Vrankic, Braun and Bediako inside plus Jalen, Pipes, Stewart and Giordan should find it easier to finish at the rim.

Robertson does everything for them…sort of the Plots version of LMU’s Eli Scott or Jahlil Tripp from a few years ago at Pacific. Robertson and point guard Meadows came with Legans from Eastern Washington; so while Portland’s roster completely turned over with all new scholarship players they do have the benefit of Robertson and Meadows who Legans’ trusts, who know his system and have clearly helped instill the culture he trying to establish. Legans is a youngish guy, pretty passionate/intense and his teams seem to follow suit and play hard.

My section is reportedly “sold out” according to a visiting parent, so it could be a respectable crowd for Saturday afternoon tip-off.

I’m in attendance doing my part. Then again, I was also at the USF game so I’m hoping to break even on the season here.

For what it’s worth, Justice was part of Senior night intros. Doesn’t stop him from returning I guess…we’ll see if it foreshadows his intent for next year.

I’m trying to watch the stream but the WCC site seems down. Anyone else have luck getting it going?

Josip brought Big E on the floor with him. My heart is full.

Pilots coach going crazy on sideline . He yelled “should have came to Portland “ at one point 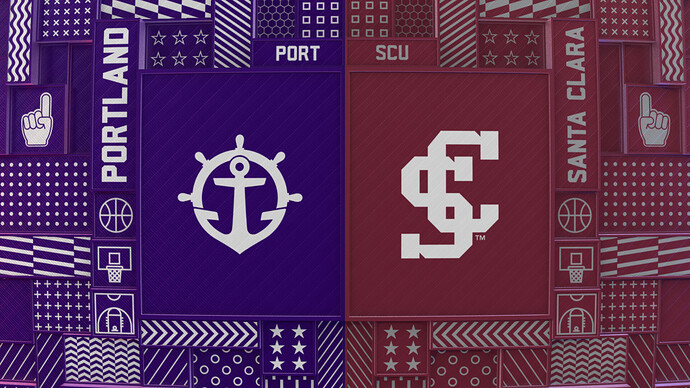 Some serious bricklaying these last 6 minutes…

This Almaden Spirit group rules. Book then for every game.

We have to make Portland more uncomfortable when they are on offense. Only 3 turnovers in the first half for Portland.

I would have Stewart and Giordan Williams pick the Pilots up full court whenever they are in the game. Be your Super Subs that go at it with 110% effort like a late inning reliever in baseball.