USD:
13-10 overall, 6-4 in the WCC, coming off a 92-62 drubbing vs. GU. On the surface, USD’s league record looks impressive but it’s mostly due to weak early weak schedule and the fact they are coming of terrible year so they get one of the weak schedules only playing BYU and GU once each. Their remaining 6 games include us, 2 vs. SMC and 1 vs. USF, plus a game @ Portland that Torvik is showing as even. Odds are they finish 8-8 or worse…but still a big improvement over last season and we can’t look past the Toreros to the big games next week.
USD’s starting 5:
PG: 6-0 frosh Wayne McKinney
SG: 6-3 sr. Joey Calcaterra (top perimeter threat)
Wing: 6-4 sr. Josh Parrish (non-factor from the perimeter)
Forward: 6-6, 240lb sr. Marcellus Earlington (top scorer, scores inside and out)
Center: 6-10 sr. Terrell Brown (had double-double vs. us last time and is a good rim protector).
6th man Jase Townsend plays big minutes and is their 2nd leading scorer.

Terrell Brown impressed in our last game providing good rim protection (5 blocked shots) and interior defense and USD prefers a methodical pace…we need to keep it up tempo and look for early offense…diminishes Brown’s impact and opportunity to protect the basket. And a track meet doesn’t suit a wide-bodied guy like Earlington.

Hope to see Stewart’s role continue to grow. And just need to keep doing what we’ve been doing…good, balanced offense, share the ball, good ball and player movement leading to easy buckets. And this is not a game to play through Vrankic in the post…just plays right in to USD’s strengths and slows the pace.

Prediction: Broncos prevail 76-70…closer than we’d like but we get the win.

Feels like a potential let down game at the Slim Gym. However, the Toreros have a rough time putting the ball in the basket against decent competition (which we are) Broncos 80 USD 68

Let’s go Broncos. A season where we don’t drop at least one on the road in Southern California is few and far between. That said, I think we have more to play for than they do and certainly have the talent to win…

This game has scared me since watching our home game vs the Toreros just a couple weeks back. I’m contemplating going to the game (just 10 minutes from my home) if Ican find a fellow Bronco or more to accompany me. Not sure that I can handle the torture alone!

Prediction: SCU 77 -73 USD. A nail biter, but we prevail on the backs of Justice, Stewart and Pipes, with important defensive contributions from Holt and Braun, the latter ending up in foul trouble, but for good reasons. JW has a good defensive game, but Scholl makes sure he doesn’t get any easy looks.

Hope I’m wrong and that we cruise through this game, but I just don’t think our history in mid-afternoon starts is very good.

At the beginning of the year, I doubt many of us would have circled this as a big game, but it’s definitely shaping up that way. This three game stretch is huge.

I haven’t watched enough of USD to know, but it just seems like we need to run them out of the gym. I don’t think they’ve had a single win when they’ve given up 70 all year. We live on giving up 70, whether we win or lose. I think we’ve given up 70 in like half our wins. Here’s to picking up the pace and keeping the 70+ loss streak alive on USD. Broncos 75-68.

And a heads up on TV coverage…in my area, the game is being carried on Root Sports. Might be true for others outside the Bay Area or CA.

For those in SoCal, it’s on Bally Sports. They’ve been covering quite a few games this year.

Wow, thanks for the tip! Interesting lineup. They are carrying BYU@Gonzaga at 2pm as well. 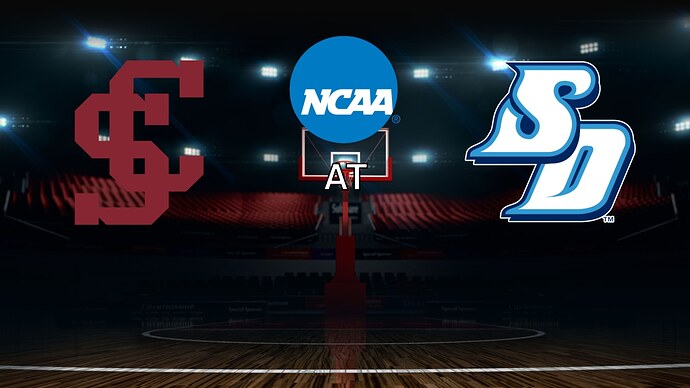 I think that is a replay of the 1st BYU-GU game.
Today’s GU@BYU is at 7PM on ESPN.

That must be the prior Zags vs BYU game. Tonight’s is later this evening on ESPN. Most of Bally broadcasts have looked pretty janky like the Stadium video feeds. They’ve had a bunch of random games this year though, which is cool. In my area, it’s channel 36.

ahhh, I didn’t catch that, thanks for the clarification

Tempo in our favor the first 6mins. But not liking how the head to head of Vrankic+Braun vs. Earlington+Brown is going.

Game was tied 14-14, fanning the flames of my fears. Then our boys started to run and move, and they’ve outscored USD 25-7 thus far. What else does Sendek need to see?

Nice 1st half aside from those last 30secs.
Offense rolling, everyone contributing.
And rebounding, a frequent weakness, has been great, 0 off rebounds for USD, 9 for the Broncos…huge differential that rarely occurs for us.

That’s how we should be playing almost all the time, especially against less athletic teams. One of our best halves of the season, although we seem to kill ourselves at the end of the half unnecessarily.

Bediako needs to stop the habit of putting the ball on the floor in the key for a useless dribble. Just go up with the ball! Catch and shoot!

Would be nice to see Portland beat Usf …

First 8-10 mins of the 2half had me nervous, but we settled down and closed it out.